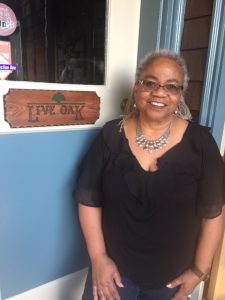 Before winning Jazz Search West 2017, Le Perez had never set foot in a recording studio. A therapist by profession, Perez majored in social work and spent her career working in psych wards, jails, and chemical dependency units—all while maintaining a deeply ingrained love of music and lifetime membership to the “sing in your shower club.” But as she laughingly says: “I’m old!” It’s time for her retirement career.

Perez was convinced by her friends and husband to enter Jazz Search West and she made it through auditions and several rounds before finally performing at Yoshi’s Oakland and winning the grand prize: a demo, recorded at Live Oak Studio. Despite noticing that most of the other contestants were much younger, Perez feels like her experience has given her an edge, especially when it comes to singing her way. She refuses to be pigeonholed into one category, calling herself a “blues-jazz singer” and taking advantage of her range.

She laid down three beautiful tracks at Live Oak, including a stunning gospel rendition of Stephen Sondheim’s “Send in the Clowns,” with the help of Tammy Lynne Hall on keyboards, Daniel Lucca Parenti on bass, and Rob Rhodes on drums. Perez is excited about the prospect of recording her own music as well with Hall.

Live Oak Studio is delighted to be a part of launching Le Perez’s career, and can’t wait to see what else is in store for her.