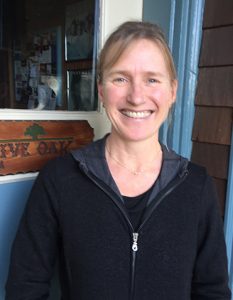 When the Tassajara Zen Monastery in Central California was threatened by wildfire in 2008, firefighters decided to evacuate. Five brave monks, however, decided to stay behind and do what they could to protect the monastery. Writer, longtime resident of California, and former Zen monk herself, Colleen Morton Busch, brings the story to life in the new audiobook adaptation of her book Fire Monks: Zen Meets Wildfire.

Live Oak Studio played home to Busch’s “exhilarating and exhausting” experience. She narrates the story herself, which is only appropriate as she also practiced at Tassajara. “This story wanted to be told, and I wanted to tell it,” Busch says, delighted that it may reach new readers. Those new to Zen teachings are more than welcome—they’re actually her target audience. She wants readers to find their own reflection in the story, and see that “ordinary people could have extraordinary courage.”

After moving to the Bay Area over twenty years ago, Busch fell in love with the natural beauty of California, but understands its dangers. She implores anyone listening to “be better stewards of the Earth.” Our world is constantly changing, and we need to be in balance with the world around us. Practicing Zen Buddhism helps Busch find clarity in a chaotic world, and she wants others to find the same, so that we may all thrive “in the fire zone of being human.”